Questions and Answers About the SotSverse

Many players and Lore fans have asked over the years what Living Steel weapons look like in real life.

As it so happens, there is an artist in Whittier California who was apparently raised by Tarka, and actually makes Living Steel weapons.

A nice kitchen knife, by Tarka standards. The heavy blade is suitable for chopping through the joints of small crustaceans.

Any Tarka would be pleased and proud to own a blade like this, although the configuration is traditionally human.

It must be said that some of Ernest's work is exceptionally beautiful even by Tarka standards. Any member of the steelworker's caste would happily call the creator of such a blade by their highest title--"Orru Dai", Master of Steel.

For the love of... Man that is beautiful! And it is all through layering of steel? Impressive planning and execution.
It was nut scrolling down every one of them getting better and better, until the last one, too gaudy for my tastes but still wildly impressive.

I tihnk an emoticon says it best:

Take your pick, either one works for me.

Every time you use 'fluff' for lore a Kerberos developer dies. And they are already an endangered species.
Top

Mr. Ernest does market his work. You can find the selection of knives that he currently has available on his website. 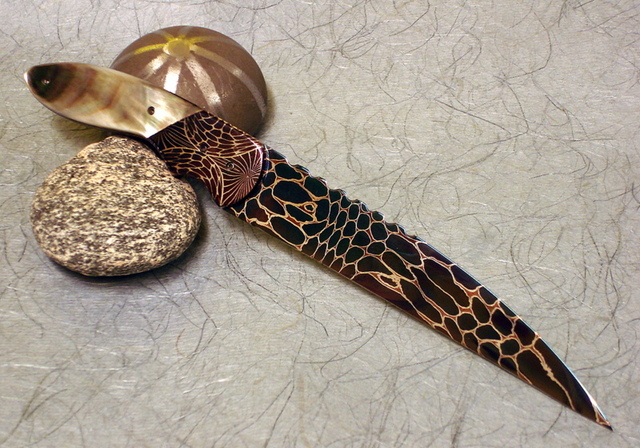 Pretty amazing that you can do that with just blueing techniques.

You can't trust the Liir. Never trust someone that smiles all the time.
Top

fiendishrabbit wrote: Pretty amazing that you can do that with just blueing techniques.

fiendishrabbit wrote:I like this one:
*Cool Knife Pic above that doesn't need to be re-posted*

Pretty amazing that you can do that with just blueing techniques.

Oh yea. That one is awsome. The others are impressive in a "kaleidoscope" sorta way, but I like the more natural looking pattern on this one.
Top

Went to his page and actually began wondering about buying a cooking knife. Imagine taking one of these out every day... Obviously such a knife wouldn't need mammoth tusk handles (is that even possible?).
Every time you use 'fluff' for lore a Kerberos developer dies. And they are already an endangered species.
Top

Tarrak wrote:Went to his page and actually began wondering about buying a cooking knife. Imagine taking one of these out every day... Obviously such a knife wouldn't need mammoth tusk handles (is that even possible?).

It certainly is possible, teeth and ivory are pretty much the last parts to decompose (assuming you weren't stating a rhetorical question).

Im not sure how well the bluing effect holds up to regular usage. If you're going to invest the >$500 for a kitchen knife it is something to consider.
Top

I'm not. Don't have the money. And it was partly rhetorical. I know that he says he uses those parts, and I know they last a long time, but it isn't as if we are rolling in mammoth tusks as it is. That stuff has got to be expensive if even available for 'consumption'.

In any case, I was considering sending him a mail asking how well the knives could handle cutting meat a few times a week or something like that. And the knives can be as 'cheap' as 250$, as some of the knives currently being sold are listed as. If I really had to get a knife from him it would be simple, mainly the steel.

The following knives are similar to what I would personally prefer in terms of bladeeffect. Obviously the actual blade would look different and the handle would need to be robust and easy to handle.

Alright that was getting OT. So... Nice ot get to see how living steel would look. I'm sure most of us expected something like this given how Tarka ships look, but the colouration and intricate layering is just beautiful.
Every time you use 'fluff' for lore a Kerberos developer dies. And they are already an endangered species.
Top
Post Reply
13 posts • Page 1 of 1

Return to “The Lore”

Users browsing this forum: No registered users and 3 guests